Magnetron in the microwave

Magnetron in the microwave 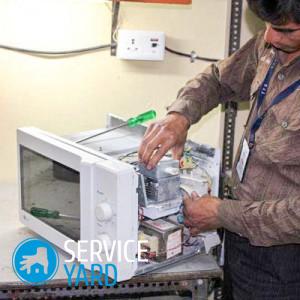 This article is devoted to such a difficult issue as the independent repair of a microwave oven, namely, the diagnosis and replacement of a magnetron. Unfortunately, any, even the most reliable, equipment sooner or later fails. A microwave is no exception to this rule. You can often watch how the microwave slowly warms up or completely ceases to heat food, despite the fact that there are no visible signs of breakage. The inclusion is triggered, the fan is functioning, the plate rotates. About 90% of breakdowns occur in the microwave magnetron.

The principle of operation of the microwave

The heating of food placed in the microwave occurs due to the influence of decimeter electromagnetic radiation on it.

Important! The frequency of electromagnetic waves used in household appliances is 2450 MHz.

Ultra-high frequency radio waves, acting on the polar molecules of the product (this is mainly water), “line” them along the lines of force of the magnetic field. This leads to an increase in the temperature of the product. Microwave waves heat the water, and it, in turn, warms up the entire product.

What is a magnetron?

A magnetron is a device that generates radio waves of the required frequency. The magnetron device of a microwave oven is an electrovacuum diode:

Important! During the operation of the magnetron, a large amount of heat is released. The case of the device is placed in a plate radiator, which is blown by air from the built-in fan. Overheating of a magnetron in a microwave is fraught with its failure, therefore, it is equipped with a protective device - a thermal fuse.

We will understand the purpose of these details in more detail.

Thermal relay - what is it for?

We continue to deal with the question of what a microwave consists of. A thermal relay or thermal fuse is designed to protect the magnetron from overheating, as well as to protect the grill, which many models of microwave ovens are equipped with. Thermal relays are designed for various temperature ratings.

The relay is set to a specific temperature using a bimetallic plate.

Important! If the temperature threshold is exceeded, the plate bends and then opens the contacts. The microwave turns off. When the plate cools, its geometry is restored, and the contacts are closed again.

A fan is one of the most important parts of a microwave oven. Its functions are as follows:

Important! When cooking in the microwave, a large amount of heat and steam is released. Due to the small excess pressure created by the fan, water vapor and heated air exit through special ventilation openings. 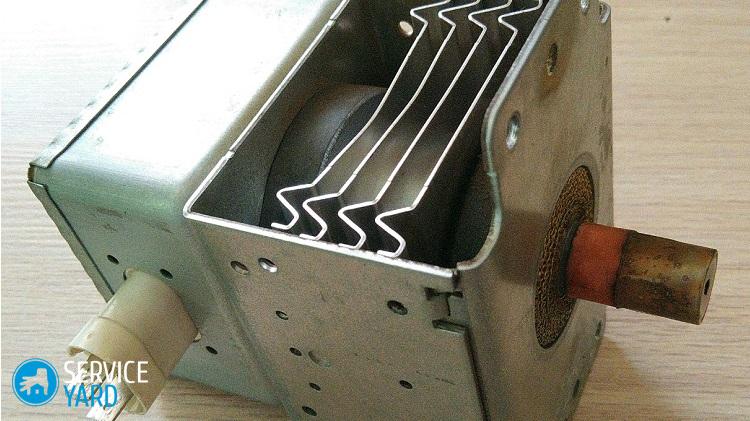 Microwave radiation itself is so powerful that without certain precautions it can harm all living things. Therefore, the microwave oven is equipped with a shielded working chamber made of metal, which prevents the radiation from coming out.

The glass from which the door is made is covered with a metal mesh that does not transmit radiation, which generates a magnetron in the microwave. In addition, it is important that the gap between the microwave door and the cabinet remains the same. The furnace is designed so that it is in the place where the door adjoins the body that the electromagnetic wave has a zero value.

This is a kind of “brain” of the device. It performs 2 tasks:

Modern “microwave” models are equipped with the following options: 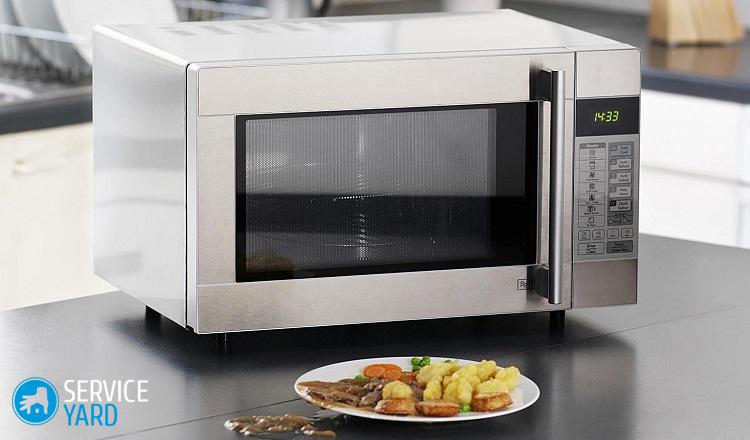 Possible damage to the magnetron

Checking a magnetron is a pointless exercise without basic knowledge of its possible malfunctions.

Important! The mistake of many "craftsmen" trying to repair the microwave on their own is the complete removal of the feed-through transformer. It is strictly forbidden to do this, since it can provoke a transformer malfunction and a fire of the device.

Here is an overview of the likely malfunctions of the magnetron in the microwave and their causes:

Important! For independent replacement of the capacitor, ordinary solder is not suitable. It is necessary to use refractory solder or a compact resistance welding device.

The only magnetron malfunction that cannot be checked at home is a vacuum break. For this you need special equipment.

The cost of this device is quite significant, so you need to make sure that the cause of the malfunction is in it. So, how to check the magnetron in the microwave? The algorithm of actions is as follows:

Important! Of course, the ideal option is to check the magnetron on a special stand, but only a specialist can do this. At home, this is difficult.

If all the elements of the power circuit are in good condition, then the problem is in the magnetron. Have to buy a new one. Install this spare part in the microwave without any difficulty.

It may be that the original is not on sale, so you have to think about buying an analogue. Choosing an analog of a magnetron, you need to pay attention to the following points:

Important! When repairing a microwave oven, it makes sense to immediately spend time and put it in order from the point of view of hygiene. To do this, use our methods that will help you in minutes in full.clean the microwave from grease and dirt.

It is known that any disease is better to prevent than to cure. Therefore, proper operation of the microwave oven is the best prevention against possible malfunctions.